Oasis Live at the Bataclan in Paris ... at last .
Gig was supposed to take place on sept 30th and was posponed because of what happened to Noel Gallagher In Canada. Fuckin' Canadians.
Adam Green and Gary Moore are also playing tonight in Paris and i really would have prefer to go to Gary Moore, but seeing Oasis in a theatre is something you can't miss as they're filling up stadiums in England.
They will be back in Paris in Bercy next year in March. 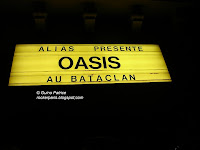 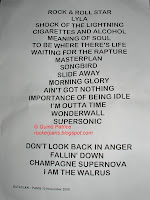 I' m not a big fan , i've seen them a few times and i always though they were a bit average on cd and on stage.
Can't say anything on the poor guy who is opening tonight , one song was enough so we left for the bar.
The show is recorded for Canal+ TV ( to be broadcasted December the 11th at 10 :30 pm ) so there are a few cameras , strange enough the lightning is shit they've played most of the first part in the dark.
I didn't know that but the show was broadcasted live on France Inter radio.
http://www.radiofrance.fr/franceinter/ev/fiche.php?ev_id=529
Sorry no picture for this gig as , Patrice Guino , our photographer didn't bother.
Liam and Noel are very static so are the other members of the band and the bros are not really communicating with the audience as least we didn't hear Liam saying "fuck" at all, times they are a changing.
After Liam threw his tambourine in the audience it took 2-3 songs for someone to finally get it, ten people were fighting like mad to get it. That was funny to watch from the balcony.
The setlist is up there , as you can see they've played many old songs at the end.
They've played their usual show , nothing more nothing less, on autopilot.
Thankfully they ended the gig with " I' m the walrus " one of my favorite Beatles song.
Liam threw his microphone to a girl at the end.