Daniel Darc is playing for Virgin 17 TV show Trabendo sessions.
There are a few gigs tonight in Paris Sigur Ros is playing the nearby Zénith, La Cigale welcomes another sold-out Inrocks festival...
The trabendo is really empty as i make my way in , no more than a 100 people in here , is it because it's saturday night ? Where are Daniel Darc's fans ?
It's a free gig for fuck's sake .
Oh... i forget to tell you that Daniel Darc is the former singer in french 80's band Taxy Girl. He's a character with tattoos all over his body.
He's playing with his mate for years Alice Botté on guitar and musicians from french band Asyl. 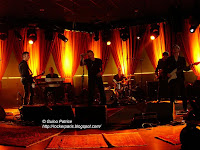 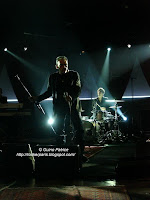 Nice hour Pop-rock show, as always in french music lyrics are very important , daniel has lived already several lives not for the better but he's ok now. He played a few songs from his recent cd but the concert wouldn't be perfect without Taxi Girl's only hit " Cherchez le garçon ".
Last song was " Psaume 23 " a -musical poem-
see complete setlist for details : 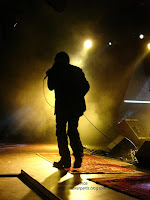 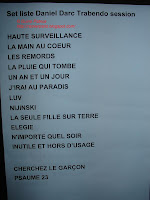