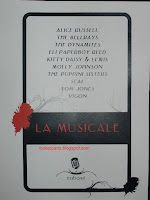 Just back from the second recording of " La Musicale " . Both recordings will be edited for one TV Show broadcasted on Dec 23rd .
Tonight no big names like yesterday ( Seal & Tom Jones ) but it was a KILLER.
The BellRays , The Dynamites feat. Charles Walker , The Puppini Sisters , Vigon and youngsters Kitty daisy & Lewis .

Then we have the Mighty Bellrays , they don't need any introduction they fuckin' rock & soul but tonight is a special treat with two cool covers and an unexpected 3rd song that wasn't planned.
they're always great even though i prefer when they rock at 200 MPH.
http://www.myspace.com/thebellrays

Vigon , this French Maroccan singer is a bit of a cult figure over here , he released a few singles and an album on Atlantic in the 60's and then completely disappeared for 40 years. He's back now as his album is finally out on cd now 40 years after its original release. Voice is fantastic a mix between Otis Redding and Sam Cooke . he broke down the house with his covers of Ray Charles' " I can't stop loving you " and Bob & Earl's " Harlem Shuffle" ( covered by the Stones ) Standing ovation , better response from the 400 strong audience than Seal and Tom Jones put together yesterday . He was the only artist to have an Encore over these 2 days of recording with Otis' " I can't turn you loose" .
VIGON RULES
Listen to that : http://www.myspace.com/vigon

Last artists to play are 3 young english , 2 sisters and their brother : Kitty Daisy & Lewis in their late teens playing early rock ' n Roll with their dad on guitar and mum on double bass : It's a family affair . they 've done a very good set too.
http://www.myspace.com/kittydaisyandlewis

I mean, it's hard to see 10 different artists playing different styles over two days and to like them all.
You know me i won't hesitate to say it if any of this bands were crap but they were all great.
Fantastic package for this Tv Show , Stéphane Saunier is always booking great bands for Canal+ on the " Album de la semaine ". He made the right choices for this one .