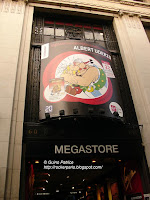 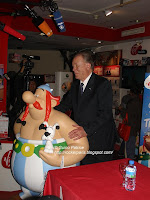 Uderzo , Famous French cartoonist and creator of comic book Asterix was doing a very rare signing session for the released of new book " L' Anniversaire d' Asterix et Obelix".
It's also the 50th anniversary of this french comic book , so lots of people queueing early & LOTS of press , different Tv from all over the world.

I know It' s NOT rock'n roll but I've read Asterix' books since i'm 11 years old so...
And it was probably one of my last chance to finally meet Uderzo as he's 82 years old.

It was a bit of a mess to get a ticket ( only a 100 ) to have your comic book signed as the characters from the cartoon were giving them away randomly to people waiting outside the store, I was lucky to get one and was the first in line to have it signed.
As you can see on the picture Uderzo has trouble holding a pen so it might be his last comic book. 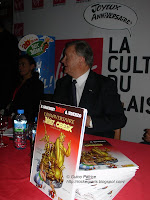 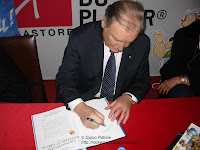 Then I left to go to One Shot Not tv recording with Archie Shepp , Skunk Anansie , Kasabian, Madness ...
Publié par Angelo Misterioso à l'adresse 1:22:00 AM