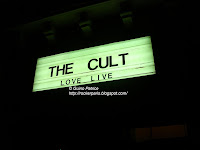 After opening for The Who in Paris Bercy a couple of years ago , The Cult is back in Paris , this time to headline the Bataclan theatre. 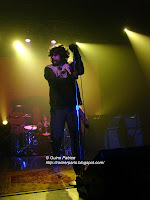 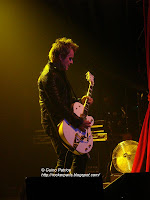 As we get in , french stoner band Nebulla Oscillator are already playing , the sound is messy and it seems like they're playing the same song over and over again.
It's very easy to get down the front of the pit as there are lots of spaces ; the balcony , with reserved seats for the crazy fans who are willing to pay more than a 100 Euros for a meet & greet after the show, is quite full. 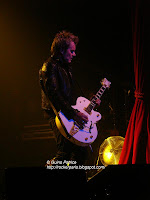 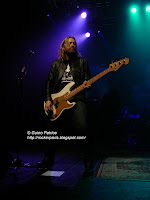 They start the show with " Nirvana " , the sound is neat even tough Ian ' s voice is very far in the mix.
Of course there are always a couple of drunk assholes pushing their way to the front and pissing off everybody, the security had to calm them down and kicked one out in the end 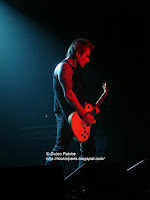 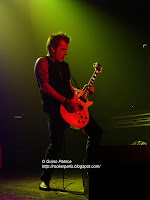 Anyway Billy Duffy on the guitar is on top form, still looking great and posing with his guitar like a true guitar hero unfortunately there are no photographers at all as The Cult didn't want any press photographers ( but us ) WOW so enjoy the Pics.
Ian is looking more and more like Jim Morrison at the end of his life when he was living in Paris 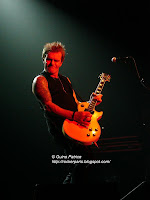 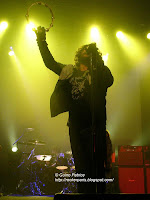 I don't know the new guys at all but they have a nice bass player and a funny looking guitarist.
A fweird thing happened : Ian though that one guy in the front was challenging him or insulting him so he spat in his face and insulted , the poor guy, several times and asked the security to kick him out. They didn't know what to do as the guy didn't do anything wrong.
In fact he was just showing his " The Cult " tattoos to Ian.
Big misunderstanding.
The show went on without problems ( see setlist for details ) 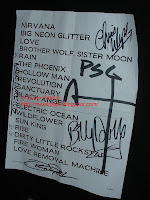 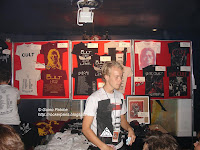 After the show we went to the Meet & Greet ( of course we didn't pay , do we look like we have to pay for an autograph ? No fucking way .
There were around 50 people queueing , the band was nice and chatty sitting behind a table , it wasn't a proper meet & greet like i though it would be but you could get a picture with the whole band. So cool. 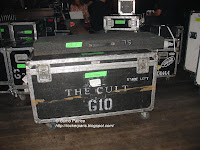