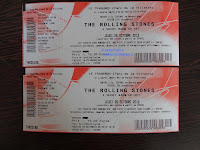 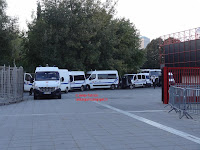 Hard to believe that I'm at the tiny Trabendo club to see The Rolling Stones. We've already seen some famous band in this club, including The Strokes, Green day, Muse, Metallica.... but The FUCKIN' ROLLING STONES !!!

We had to go through several security check points, for the tickets (twice) and search, you couldn't get in with your cell-phone or any camera...
I've never seen so many security guards, police in riot gear (?!?) and they've closed down the whole perimeter around the club. It looked like a military zone in Irak.
All that shit for 500 Rolling Stones fans most of them in their 50's? Bollocks !
Lots of familiar faces in the club, just 3 small backdrops in the back: including the cover of the new album above Charlie's drumkit.

9:15 pm , The band is getting on stage, we're just down the front facing Ron Wood.
They are all skin & Bones with gray faces and grief-written lines.Charlie's looking good and Keith Richards looks a zombie, Scary.
We're so close that we can see every line , every little muscle or vein on Jagger's face : Impressive, specially after seeing him/them only in Arenas or Stadiums.
Lightning is white and not that fantastic, sound is not too loud and perfect !

Route 66 is the first song played... in slow motion, I guess there's a bit of tension as it's their first official show since 2007.
Mick Jagger's is talking in french mostly, "I can't believe that we're still standing up" Yeah that's right specially regarding Keith Richards shadow, He looks scary and very frail; most of the time, there is no life in his eyes and from time to time there's a smile or a wink of an eye or a grin that shows us that there's still a bit of life in his body & brain. I've been told they had trouble finding an insurance Cie to sign them for a tour, I can understand why by looking at Keith.
The guitar playing is (still) perfect but kept to a minimum but isn't it his trademark ? Ronnie 's shining so is Mick.
He's playing the guitar on several songs "when the whip comes down", D&G" &"Miss ya".
You can see that several times they are relying on Chuck Leavell's direction to play a song.He's the Musical director and Mick Jagger , the conductor.
Ronnie's fooling around a bit and Daryl is faultless with some groovy bits, specially on "Miss You".

Great 75 min gig, I would have never dreamed to see the Stones in such a tiny club and (almost) front row.
Now it's done, hallelujah !!!

More Pics from the show HERE 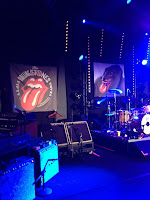