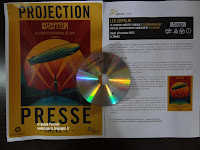 Early wake up call this morning to attend the Press screening of Led Zeppelin's new cd/dvd to be out on November 19 in the whole world and with Premières in France @ Gaumont-Pathé movie theatres on Oct 18, check Pathé Live for the cinema listing playing the movie.

As usual in France, many journalists didn't turned up, I guess it was too early for them so we had plenty of space to enjoy the show.

Recorded live @ The O2 Arena in London on December 10 2007.
5 years, it took them 5 years to finally released it.
Needless to tell you it's AMAZING.
It's taking the band a couple of songs to get into it ( "Good times bad times" -" Ramble on"), you can feel the tension on their faces, for the third one "Black Dog" things are getting more relaxed,then for the rest of the show starting with  "In my time of dying" it's faultless.
Recording is perfect of course, Robert Plant admitted that he re-recorded a couple of things, Page probably did too. They also edited out a couple of chat between songs.
Hard to believe that after such a gig they, in fact Robert, never wanted to play again, even though a show at the Stade de France was planned for the summer of  2008 and ... never happened.

The show is really how I remembered it from that Fantastic night @ the O2 Arena, Yes ! Rockerparis was there to attend such an historic event.
2 hours of pure Magic & Rock'n Roll.
It's a must see, specially in a cinema on a big screen. 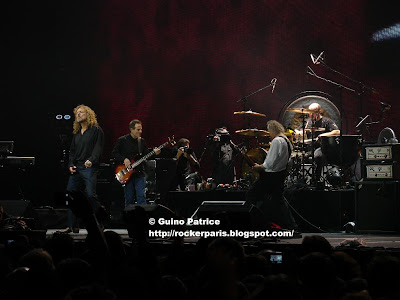