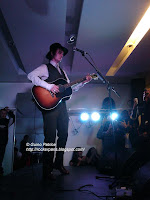 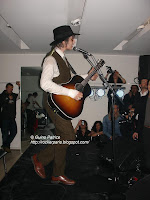 We left Canal+ a bit late as DJ Mime wanted a pic with the bass player of Fanfarlo.
So we arrived as Peter was singing the 4th song of his set ( "Can't stand me now").
Lucky to be there as it's a secret show for the Fashion week.
It's taking place @ Joseph store just in front of the 5* hotel Plaza Athénée on the very posh Avenue Montaigne. 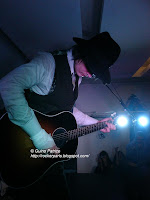 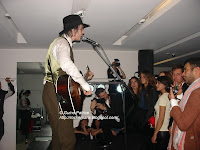 Lots of very sexy girls and the champagne is flowing but nothing to eat ( what a fucking waster Pete would say). Crisis ?
The place is tiny but the shop is far from beeing packed maybe a 150 people.
Peter is on his own on the acoustic guitar, the set is full of wellknown songs.played one after another like at the Fleche d'Or in January ( click for review,sertlist, Pics & video).
No talking between songs, he's probably here to make some quick bucks.
Not really the audience you'll see at rock gigs, very 'fashion'.
The Plastiscines are here, french actress Emma De Caunes, Irina & Mlle Agnes as well. 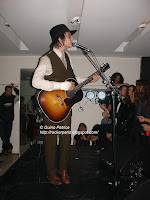 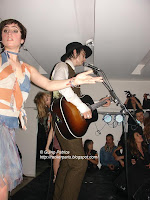 The 2 French ballerinas are dancing on 2-3 songs.
Cool set ( about an hour ) in perfect conditions but it seemed that a lot of people in the back didn't give a shit of what was going on on the stage.
Anyway we enjoyed the show and that's the most important. 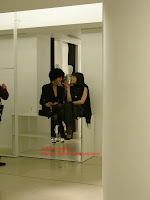