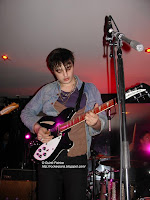 Fantastic way of ending a week of concerts with The Peter Doherty & friends ' "Family"
Click on each link above for review , setlist , Pics & videos 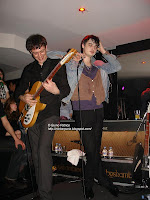 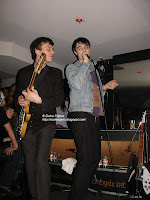 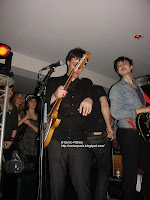 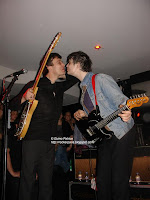 Kissing
They started the gig nicely with "Baddie's boogie" ( Here on video ) and then i can't bloody remember a thing , they've played hits after hits , it was a Libertines/Babyshambles Best of... they even played a cover from one of those shitty electronic duet from the eighties. ( "West end girls" from The Pet Shop Boys).

Pete and Mick were in high spirit , both having the time of their life , joking , kissing eachother ( see picture above ) .
Nice to have Mick back for Babyshambles songs as Graham Coxon seemed a bit lost playing them ( He was perfect on Pete 's solo material @ the Bataclan ).
Conditions were perfect for me as i was seating in a sofa just in front of Pete ( well , in fact there was no stage at all ) with 200 people behind me in this trendy club having also the time of their life.
A few posh people and very sexy girls ( this was the last day of the Fashion week in Paris ) but many fans were invited by band members ( Thanks Adam for putting Mathilde and I on the guest list ) including all the "hangers on" from the Bergerac café.
The band was on for a good hour playing 14-15 songs.
Pete was particularly WILD tonight singing in the audience , sofa-diving into the audience ( first time i'm seeing someone doing a SOFA-diving ) ; crashing his mike or the drums by jumping on it and finally tearing down part of the ceiling by hitting on it with the mike-stand .

Pete was really wasted by the end of this FANTASTIC GIG , probably the best I have ever seen from the Shambles.

Videos from MadameMime007 " I Wish " another version of "baddie's boogie".
Another video from the secret gig "There she goes"
"Baddie's Boogie" :