AC/DC has left Paris on saturday , sunday is a day off for me.
Monday back to rock'n roll with Pete Doherty playing Canal+ TV show : " L' album de la Semaine".

This week with AC/DC will be hard to forget for many reasons, from the day they arrived in Paris ( Feb 23rd ) till the day they left ( Feb 28th ) to go to belgium to play their next show in Antwerpen. 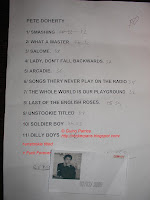 setlist to be completed...

Pete Doherty solo with just an acoustic guitar is always funny to see ( remember the gig @ the Truskel which ended in chaos ) . This time it's more relax , in front of a selected audience of 200+ for Canal+.
He's very smart tonight and here to play his new album Grace/Wastelands ( out next week ) so lots of new songs that i'm hearing for the first time plus a couple of Babyshambles for the encore.
I'll get the setlist right tomorrow.
Very nice set and for once he's playing ( mostly ) in tune and the vocals are right too.
A club gig without the chaos.
So sad he left straight after the gig , no one could meet him.