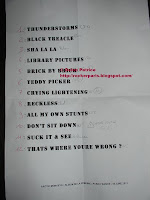 Well, We really like Arctic Monkeys @ ROCKERPARIS but we have to admit that in concert we were disappointed the last time we saw them @ Zénith in Paris in November 2009.
The music has change a lot with slower songs and the guitars are more heavy which is what we like: HEAVY
We cannot consider them as an English indie pop-rock band with up-tempo songs as they sound now like a heavy American band with slower songs.Thanks to Josh Home from the QOTSA.
Nevertheless if we like the music, LIVE there's a problem, all the guys in the band are looking so bored, it's a misery.
Even when Alex Turner is saying hello to the audience he's looking at his shoes and doesn't seem to bother at all.
They have the best job in the world, they're sellling lots of records they have the credibility and they have the fucking attitude of a coal miner going to work @ 5:00 am.
What the Fuck is wrong with them !

New songs sound good specially the single that's terrific, glad with have an old up-tempo song "teddy Picker". Only "Brick by Brick" is sounding like 60's English pop-rock, the rest is very 'American'. see setlist above for details

Good 42 min set but it could have been so much better.
A first @ L'Album de la Semaine in more than 4 years of recordings : the band left the stage to go straight into their cars ?!?, like Elvis did in the old days.