Once again Great gig , better than yesterday.
Songs are very catchy , i heard them for the first time yesterday at the Olympia and i remember most of '' em today.
Well i 've recorded the show yesterday and i watched it this morning on my computer ;-)
Very intimate afternoon gig as they're playing in front of just 200 people for French TV show " l' album de la semaine " for Canal+ , VV from The kills is there too and like yesterday sing one song.
We have a longer set ( around 75 min ) as they have to replay 4 songs at the end (including the one with VV )
They're really enjoying themselves on stage ( so much that they're telling us ), and so we are .
Great privilege to see them in these perfect conditions.
Sorry no photos or videos for this one.
Setlist ( as picture ) + 'encore' consisting of : Black Plant , Paris summer ( with VV ), Hang the Cyst , i don't like you anymore ( the last 3 songs have been played twice in that order ). 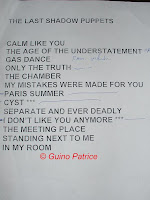 then we rushed to the Bataclan to see George Clinton ... Groovy
Publié par Angelo Misterioso à l'adresse 1:06:00 AM