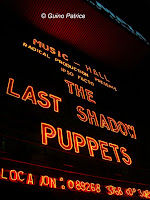 Hi Lads
Just back from holidays and already in the pit for some good rocking tonight .
THE LAST SHADOW PUPPETS is The up and rising band featuring Miles Kane from The Rascals and Alex Turner from the Artic Monkeys.
There's a real hype with this band and the Olympia is SOLD OUT.
There was a real hype too with the Artic Monkeys last year , i wonder why because they're really (just above )average on cd and live.
So i'm doubtful .
From what i've heard ( a couple of songs ) i'm even more doubtful.
Tonight is the last gig on their European tour before touring England in October ( not really the last one as they're playing a show tomorrow afternoon for french tv Canal+ )
The stage is beautifully set with a 12( ? ) piece orchestra in the back + the LSP ( 5 lads ).
Lots of young girls in the audience so the atmosphere is quite hot straight from the beginning.
They opened with " Calm like you " before playing their single "The age of the understatement" to an already conquered audience. The sound is clear and the addition of the orchestra adds a little something that makes the difference. The orchestration is perfect and enhanced perfectly their songs giving them a 60's OST feel.
Miles Kane is handling most of the vocals and it's hard to believe but he just looks like John Lennon meets Richard Ashcroft, the way he plays his acoustic guitar and the way he speaks is totally Lennonesque even tough he had a take on LOVE 's " Little red book" .
Sometimes it's hard when you're hearing songs for the first time to fully appreciate a gig but tonight i was into it from the beginning ... to the end .
17 songs , they played all of their album plus a few others.
Special treat for Paris as Alison " VV" Mosshart from The Kills came to sing "Paris summer".
Show ended with David Bowie's " In the heat of the morning" and "in my room" .
They're so tight it's hard to believe that they've played their first ever concert 6 months ago.
Great Gig !
Former CSS's female Brasilian bass player and Nicolas Godin ( half of AIR ) went to the gig together. 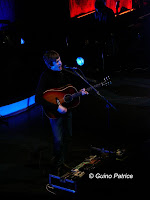 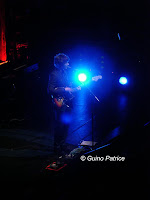 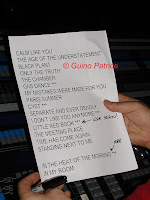 Video The Last Shadow Puppets playing "Paris summer" with "VV" from The Kills: