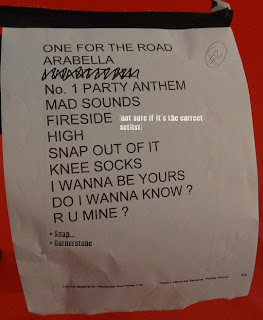 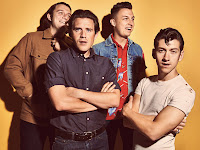 We listen to the album before going to see Arctic monkeys perform it live @ canal+ tv show in front of less than 200 people, we like it even though there are many slow songs.

I have to say that after seeing the band playing those songs for an hour, it's boring, boring and boring...
Even more unbearable is Alex' attitude on stage trying to impersonate an American crooner, this is so ridiculous when someone is trying so hard to be cool. Josh Homme IS cool but he's naturally cool without playing a part. The guitar player IS cool but Alex , come on man, specially with his ridiculous American accent.

Almost all the songs played tonight are in slow motion, the new single sounds very good and as soon as the band is bringing out the guitars ( for one song) it sounds terrific unfortunately only one song.

So Alex, stop impersonating Elvis with some ridiculous poses and bring back the heavy stuff !!!