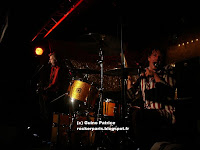 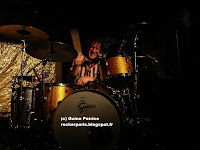 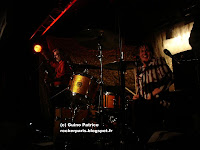 a few snapshots from Trigger Finger with a mobile

After going to The Gossip's listening party @ Rouge Club in Pigalle, we rushed to the Gibus Club in Republique, unfortunately we've missed the first part of Trigger Finger's set.
As usual they've done a killer set of greasy rock'n roll in front of a VIP audience of hangers on, journalists and record Cie executives.
Cool party but we didn't really had the time to get a JD at the bar or even to meet a few people we wanted to.

MOJO has always been a reference in the Music Industry & Music Mag in Great Britain so I really hope that the French edition will be as good as the English one.
It looks like it will as the first number is looking great, hope N°2 will be even better
Good luck guys !!! 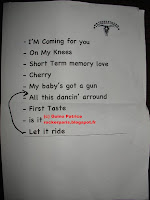 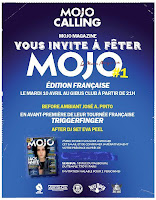 Rock & Folk Mag should be in trouble as they do have now a rival that's playing in the same courtyard.