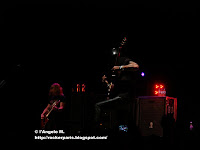 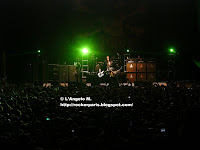 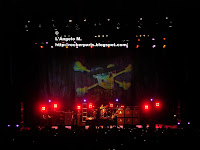 Sold -out show for Slash & Co, making it his biggest headling gig outside Guns N Roses in Paris.
Last time he played @ Bataclan (With Alice Cooper guesting on one song), with Velvet Rovolver he never made it to the Zénith as the gig was cancelled, they only played @ Bataclan (With Izzy guesting on a few songs). Even with The Snakepit he only played @ the Elysée Montmartre.
Of course he played last year opening for AC/DC @ Stade de France and @ Hellfest.

The pit is crammed and it's hot as hell so we're lucky we could secure Block Z tickets which is the best block, dead center.
Lots of youngsters, no stage for Slash , just a backdrop and one of the worst lightshow we've seen this year and no dry ice.
Most of the time Slash will play in the dark, why ?
Sound is loud and not too clear.
What about the show ?
Well, as a guitar player Slash is still on top, i'm not really fan of his solo album so live songs don't sound better, thankfully he played a few Guns N Roses songs (see setlist for details) and Velvet Revolver's"slither".
Myles Kennedy is doing a good job on vocals even if he tends to scream a bit too much.
Good choice for the Guns N Roses songs as he played some of my favourite " Civil War", "Rocket Queen", "Paradise City ( here on video) "Nightrain". Some of these songs were extended versions lasting more than 8 min. Here's "Patience" for ya & "We're all gonna die"
He played the song "Promise" for the first time on the tour and even Snakepit's "Sweet Parade" (?!?) which is far from being the best Snakepit song.
Great atmosphere in the audience with lots of GNR fans
Overall good show ( 120 min) as his solo songs are just above average. 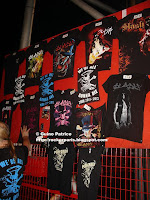 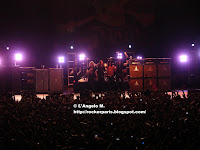 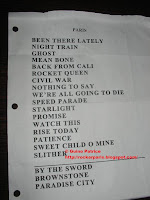