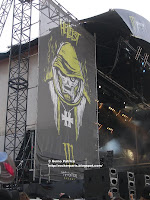 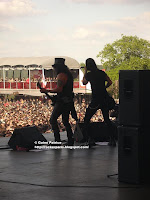 Hellfest !!! ROCKERPARIS is coming !
First time we were going to this HEAVY METAL festival , there are hundreds of bands playing, We don't really listen to Heavy Metal anymore , it's becoming so ridiculous now but there are still a few bands worth checking, one of them is former GUNS N ROSES axeman SLASH. 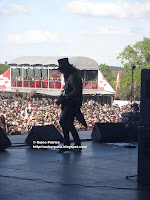 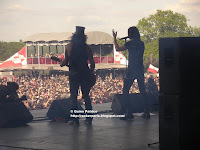 We saw him yesterday night at the Stade de France opening for AC/DC. The show was good but not fantastic maybe it was not the best conditions to see him in a stadium in daylight with lots of drunk fat fucks around you.
Today we ( I mean Patrice) had almost the best seat in da house as the little bastard was on stage in front of almost 30 000 people.
We had the same gig as yesterday, a good mix of songs from his career: GNR ("Nightrain", "Rocket Queen", "Paradise city", "Civil War"), Velvet Revolver and from the new album.
Show was OK , Myles Kennedy is good but maybe he should sing GNR songs his own way instead of trying to imitate Axl's voice. 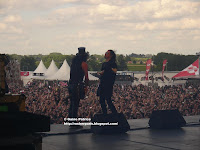 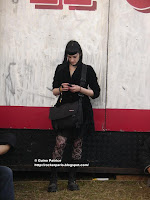 Luckily we had VIP treatment and could relax in the VIP section of the festival with bars , cool sofas and tv screen for football fanatics.
We met Mickey Dee from Motorhead who was on the site ( Motorhead was playing the day after) probably doing his "shopping". 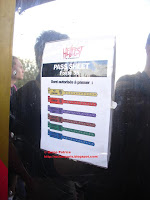 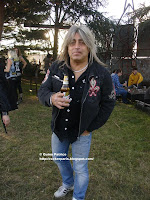