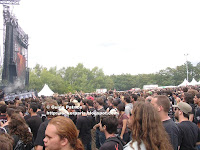 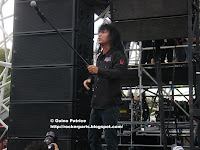 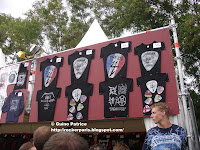 First time we're going into this... parking lot as it's the site of the Sonisphere France.
We arrived there around 3:00 pm just before Diamond Head it sounded good from far back. 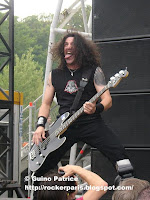 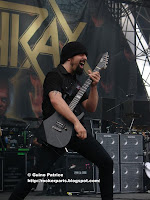 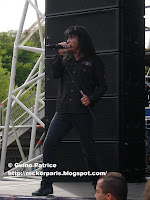 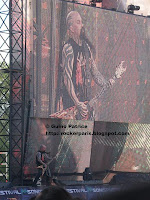 Why doing a festival in such a shitty place ? It's too small so the site wherever you go is overcrowded. Only one location for the toilets on the main site so it's overcrowded.
The ground is made of concrete and stone so there's NOWHERE to lie down to have some rest peacefully.
Even more annoying wherever you go on the site the sound of the stages (main or second) is so loud that's it's hard to speak to your neighbour without screaming even if you're standing at the complete opposite.
The food is shit, can we get some french food instead of belgian ?
And we're not talking about the mess when they opened the doors early in the morning, we were NOT there, but we've been told it was hell ...and dangerous as people pushed their way to the front and the security didn't know how to handle it.
They should ask the Hellfest for some ( many ) good advices. or find another location.
At least at Clisson you have space and you can lie down on the grass and take a nap without the PA screaming into your ears. 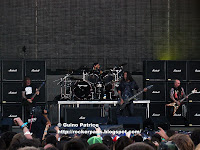 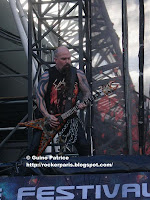 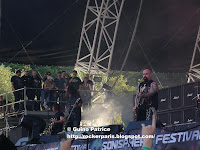 First band we're seeing is Anthrax, they're doing a good show without Scott Ian (??!?) and with Andreas Kisser filling in.
Sound is a bit loud and not perfect, the band is sticking to classics with Joe Belladonna on vocals, they're also playing a new song.
I haven't heard these songs in ages, and we're not fan anymore, we used to a long time ago.
We're lucky to be in the "Golden Pit" down the front otherwise it would be a nightmare.
Overall good show but...
Before Anthrax We already had a headache as we had to endure the sound of French Metallers Loudblast who were playing on the second stage.
It's gonna be a long day as Metallica is not playing before 11:00 PM
"Antisocal" 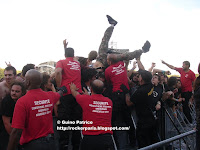 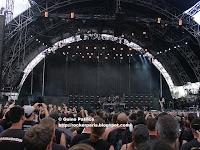 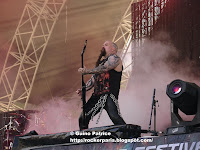 Heavy Slammin'
Then we have Slayer, we saw them a few months ago at the Zénith in Paris in March with Megadeth headlining and the show was terrific.
They've done a great show once again but the sound is very loud so it's hard to appreciate it.
Down the front in the "golden pit" it's pretty quiet but on the main site it's hot as hell with many people slamming (see picture above) or mosh dancing.The action is on stage and in the crowd either. 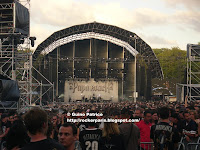 We can hear Papa Roach from the second stage while waiting for Megadeth, glad we're not over there as it's sounding horrible.
Good point for the staff all along this day: times will be respected.
Oh Yeah by the way, How about a Festival with (more) trash-dustbin cans ? I couldn't find any on the site.
Publié par Angelo Misterioso à l'adresse 7:46:00 AM