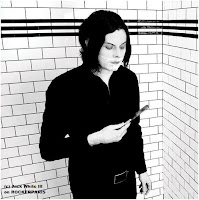 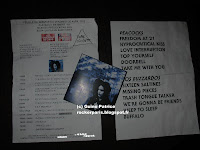 First show of Jack White in France before the one on sunday at La Cigale, it's like having him playing in your living room as the audience is sitting on stalls just in front of the stage with only 200 people.
First we have the Boys Band called "Los Buzzardos" for 6 songs set (25 min):
Quintet with bass , drums, piano,lap steel & violin/ mandoline ; as usual with Jack the band is dressed up so are the roadies.
The band is neat, finally Jack White is writing proper songs, I mean compare to the one he wrote with The Dead Weather.
I Have not listen to the record yet but the songs sounds really great.
Glad that he played some White Stripes' and dead Weather's , fantastic version of "Buffalo".
There is a 10 min intermission so that they can change the drum kit and the back drop.

Then we have the Girls Band called the "Peacocks", all the girls are really good looking all dressed in white & blue. It's a sextet with a backing vocalist.
They have a great drummer that's kicking ass and the girl on the lap steel is a very sexy blonde but I think I have a crush for the black girl on backing vocals.
6 songs most of them no more than 3 min max so it's a short 20 min set.
Jack is on top form and the guitar playing is neat, cool bluesy-rock-soul songs.

We were lucky to get both bands tonight but I don't know if it's like this for every gig.
We shall see on sunday as he's playing @ La Cigale