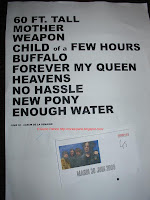 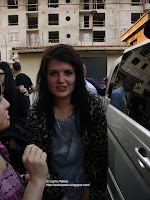 Last recording for the season before the holidays for the famous Canal+ TV show " L' Album de la Semaine ".
The studio is packed , around 200 people , lots of fans who were at the Cigale the day before ( see Pics and review + Videos HERE ). Thankfully it's not as hot as yesterday.
The band opened the set with the same song ( "60 ft all" ) which I think is not the best choice to start the gig with.
Anyway the band is on top form and after listening to the songs for the first time yesterday night live, I'm really getting into it and I have prefered this private show.
They 've played 10 songs ( see setlist above ) for 45 min.
They ended the gig with Jack on guitar on " enough water".
We could meet them briefly after.( see Pic )
Publié par Angelo Misterioso à l'adresse 10:22:00 PM