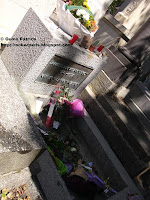 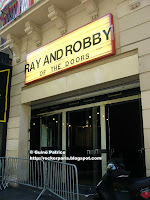 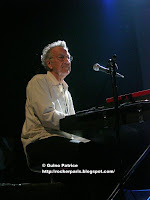 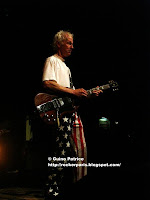 Ray & Robby not to be confused with Sly & Robbie

Today is the 40th anniversary of Jim Morrison's death in Paris, the surviving members of The Doors (minus John Densmore ) are playing a sold-out show @ Bataclan.
This morning they went to the Père Lachaise cemetary early in the morning to avoid people nevertheless we've been told it was crowded and they were assaulted by fans asking for autographs even when they were mourning. 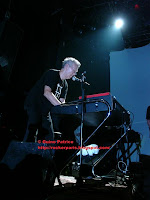 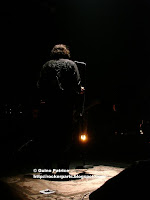 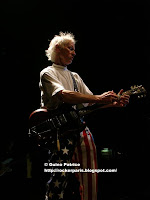 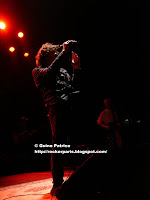 Anyway tonight the Bataclan is packed and as usual it's hot as hell in here.
Ray's on the left, Robby's on the right, Ty Dennis on drums, Phil Chen on bass and Wild Child's Dave Brock on vocals.
Great start with "Roadhouse Blues" this song is always putting people in the mood.
First thing Patrice is noticing, and the poor bastard was furious, (He's our photographer) : The Lightning is COMPLETE SHIT .
Well he's right most of the time they play in the dark and when there's light it's from behind.
There's also a huge screen in the back playing videos and psyche images, including a short movie of their visit at the Pere Lachaise this morning.
Sound is good in the middle down in the pit. 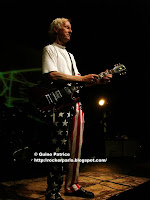 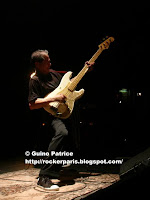 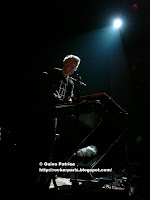 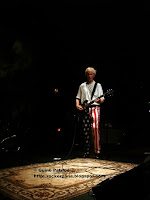 They do have a good singer but the guy is a clone of Jim Morrison, same voice and same poses.
The setlist (see below for details) is terrific, the band is playing classics after classics and as it's the 40th anniversary of the released of "LA Woman" it was out a few days after Jim Morrison died, they're playing the album in its entirety.
They already did that just after they reformed when they've played a sold out Zénith in 2003.
The atmosphere down the front is hot with lots of kids and foreigners, for some of them it's probably the first time they're seeing the guys. 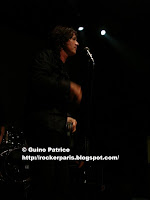 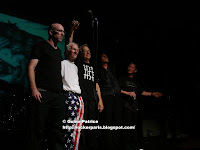 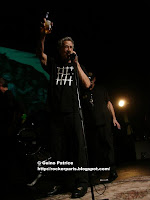 It looks like The Doors have two additional members as they do have security guys on each side of the drum kit all the time , just in case someone gets on the stage. It happened and the guy was violently pushed back by one of their roadie, another one crowdsurfed to the stage and was thrown out of the venue by staff. Why such violence ? How Peace & Love is that ?
Can't say that people working with them are very friendly maybe they're acting accordingly to some of the band members who are not very friendly either.
Funnily when people saw what happened they tried to get on stage as well only to jump quickly in the audience, nice way of teasing the security.
There's a good vibe in the audience but such a bad vibe on stage, hard to believe they're afraid of their own fans.
I remember when they played @ Palais des Congres a few years there was a stage invasion and they played a whole song with 50 people on stage and IT WAS GREAT. Only that they cut the gig short by not playing the second Encore.

Show ended with a long version of " Light my Fire".
Note: they added a couple of songs that were not on the setlist.
Great gig. 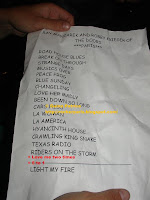