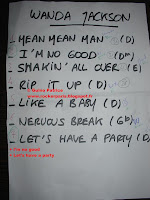 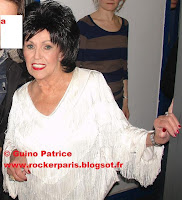 The Female Elvis as she was once called is in Paris to promote her brand new album that will be out in January of 2011 , an album produced by Jack White.
This young lady is a legend and has toured with Elvis Presley in the late 50's.
She performed a set of 9 songs ( 7 + 2 already played) in front of a small audience for this "private" gig mostly of covers by Elvis, Eddie Cochran, Johnny Kidd & the Pirates... and her hit single " Let's have a party".
Lots of talking between songs to introduce the songs, she's looking very good even though she has problem walking, she's 75.
The voice is a bit frail but she can deliver.
Like many rock artist from the fifties, she's playing with a local band, I've been told that the rehearsals were really difficult, it was the first time ever that this french band was playing with her, but on the night songs were perfectly executed.
Very nice short set

It will be broadcasted in mid-January on Canal+
Publié par Angelo Misterioso à l'adresse 11:28:00 AM