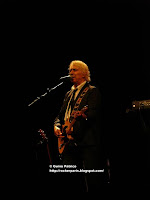 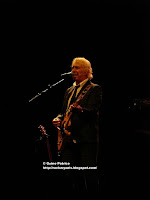 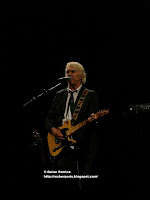 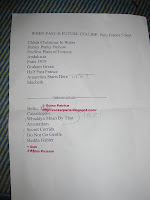 It was hard to decide to be locked in a concert hall tonight as 1) the weather was so sunny today 2) it was probably the last day with sunshine before a week of clouds & rain.
Could we miss John Cale playing his masterpieace " Paris 1919" ?
No.
Well in fact nearly as a friend of mine arrived sooo late ( I won't mention his name, I'm NOT that kind of man but ...his name starts with an -O- and ends with -Liver Peel- ) that we missed most of the first set.
Yes, when it is written 8:00 PM on the ticket , the show starts at 8:00 PM sharp @ Salle Pleyel.
Too bad it was during the first set that John Cale is playing "Paris 1919" so i won't tell you that much about it but I'm sure it was good.
The Sound was neat with the orchestra ( Orchestre national d’Ile-de-France dirigé par Christophe Mangou )backing the band ( Guitar bass, drums ) & John on keys.

Then it's time for an intermission and John is playing rockier songs ( he's on guitar for most of the second set). He still has a beautiful and power voice, he doesn't communicate that much apart from the usual "Thank you".
Heavy ending with a very long version of "Pablo Picasso".
Cool sets even though I'm not too familiar with his repertoire.