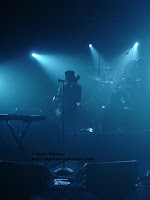 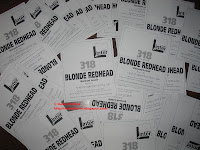 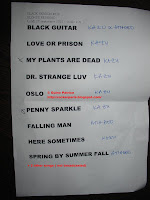 Killing Joke was playing the hot & sweaty Bataclan, we chose to see a more relax band in a nice place , the studio 105 of the Maison de la Radio with its confortable sofas.
Best conditions to see a gig when you're sitting down in a confortable red sofa with 300 other lazy bastards like us.
We already saw Blonde Redhead a few years ago ( at the Bataclan) but I don't know that much about their career or discography.
They started with very ambiant songs and then they've played some more noisy songs à la Sonic Youth.
One drummer in the back , the girl on the left on vocals and guitar the boy on the right on vocals & guitar + keys.
They're helped by some pre-recorded bass ( that was way too loud) and keyboards.
Lots of smoke on the stage and lights from the back ( remember it's a radio show broadcasted live) to create the atmosphere that goes with the music.
Cool set (with 2 additional songs that were off the air) even though it's harder to appreciate that kind of music when you've never heard anything before.
Publié par Angelo Misterioso à l'adresse 12:19:00 AM