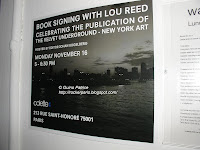 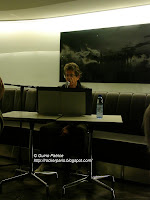 Lou Reed is in Paris for a few days promoting a new very good book full of pics and memorabilia on the Velvet Underground.
Colette is a famous hype parisian concept store ( which means they're selling shit you don't need twice the normal price ) not too far from the Ritz hotel in a very rich area.
We're far from downtown Manhattan or the Bowery. 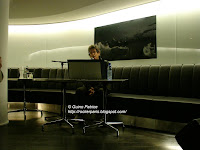 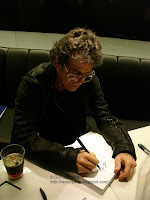 We get there earlier and to my surprise there was almost no one.
People arrived at the last minute and the place was packed with posh people .
We have nice seats in front of him , he's here to read a few of his lyrics like he did last year @ 104 in Paris -click for pics-( It was also for a book released but that was really crap,I mean The book).
Lou Reed is almost on time, No flash please !
Funny how Lou Reed is turning into a grumpy old man always moaning about someone taking a pic or reading his book while he's reading.
He did the reading like a robot as if he didn't give a shit ( he's always like this anyway )but the publisher was satisfied as they've sold lots of books today. 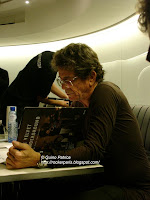 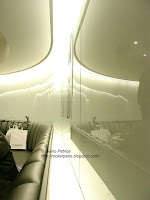 Then it was time for the signing, everything went smoothly thanks to the people from the store, Lou Reed was chatty with people , you also could seat next to him to have your picture taken.

We had a great 90 min with Lou Reed but it was really funny to see him confronting people directly when he wasn't happy with something :
" Which part of the sentence don't you understand in -No flash-" ?
" Stop taking pictures NOW you've got enough " to the poor guy next to me
" How can you read a book while i'm talking , What am I doing here ? Tell me !" to a poor girl.