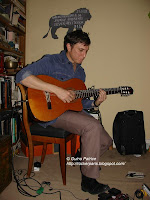 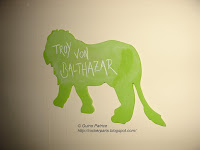 Thanks to Mathilde , Oliver could get Troy Von Balthazar to play an Oliver Peel Session.
The appartment is getting smaller and smaller each time or is it that it's more and more crowded one session after another ?
Lots of new faces this time, couldn't fit anymore people in there.
Troy played a 50 min set of his songs ( including two brand new ones to feature on his next album ) on acoustic guitar.
SETLIST: ( from Oliver Peel ) check for more Pics HERE
01: Rainbow
02: Communicate
03: Heroic Little Sisters
04: Dots and Hearts
05: Dogs
06: Very Famous
07: Duncan
08: To A Girl With One Wing Gone
09: I Block The Sunlight Out
10: Wings
11: Valentine
12: Days Of Nothing

He told us it was the first time he was playing acoustic ever in front of an audience ( I've got my doubts about it ).
Anyway the atmosphere was really laid back even though it was a bit hot, there was so many people but thanks to Cecile there were lots of cold beers, soft drinks and lots of pastries and cakes to go with.
Once again there were people from all the world : China , Japan, USA and different parts of Europe.
The world is converging on Oliver's living room. 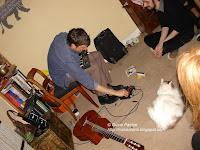 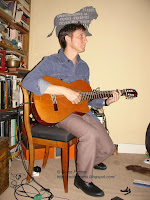 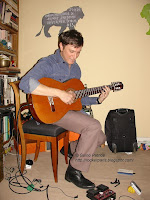 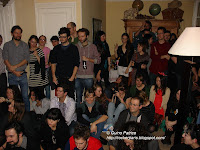 Everyone is listening religiously, specially the girls

Troy seems to enjoy this early gig a lot ( 6:00 PM ).
Nice to have a chat with new people ( I mean girls ;-)
Many people left for the Cigale to see Grizzly Bear ( Feist was a surprise guest at the end ) so we could chill out a bit and relax in the only sofa in the room after all these emotions.
Last but not least we ended the night way past midnight over a bowl of spaghetti. 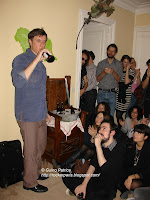 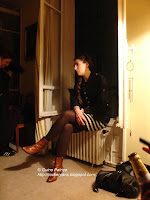 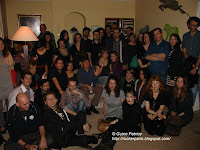 Oh Yeah ! forget to tell that Chokebore ( Troy's first band ) will be back next year with a show in Paris France.
Sorry the light, the sound are complete shite I'll upload another one soon from another source.
This is a new song by the way :