First we went to the Varnishing-day of the Gainsbourg Exhibition @ Cité de la Musique.
Lots of hangers-on as always, awfully crowdy it was hard to see anything,
We spotted Jane Birkin & daughter Charlotte surrounded by so many cameras and security that it was ridiculous, Poor girls they were so scared by all this mess that they made a quick exit by a side door. 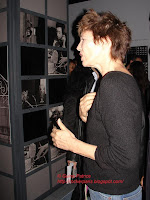 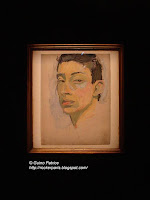 Jane ( left ) Self-portrait ( right )
Lots of hand-written lyrics and memorabilia, so that's very cool unfortunately this exhibition is a little bit of a mess, with screens everywhere playing TV shows , movies and images with no explanations at all, the sound of these tv-sets is also coming from everywhere so after half an hour you have a headache.
Lots of very small pictures on the walls so you need a magnifying glass to see them.
When they did this were they on fucking drugs or what ?
Maybe the conditions were not at their best for this exhibition. I'll give it a second chance and maybe some of us were a bit angry after dealing with this vermine PR.
Can't believe the attitude of this bitches.
Nevertheless we had a nice time at the aftershow cocktail but we made a quick exit to the new hype place in Paris : Ze 104 ( a french modern " Factory" ) 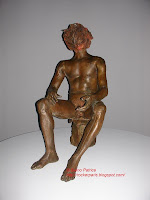 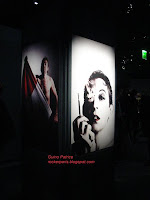 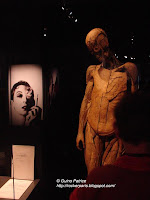 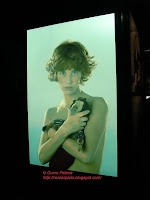 Alternate picture for the cover of Melody Nelson ( right )

Lou Reed 's reading at the 104.
It started very late ( 9:20 instead of 8:30 PM ) so we didn't miss that much , glad we didn't see the whole thing as hearing someone reading texts even if it's Lou reed's , it's a bit boring.
The 400 capacity hall was sold-out and listened religiously.
Thanx he answered a few questions . 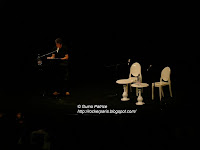 We went backstage to meet him , French superstar designer Philip Stark was there , french singer Christophe too. we all stayed there for 30 min , had a chat , he signed a few things too. Then everybody went to the aftershow cocktail , a 100 people were already there drinking Champagne. Lou Reed talk to a few, signed a couple of programs and left .
First time I was going to an event there, it's beautiful and huge. 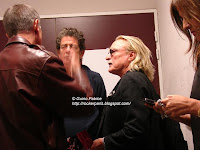 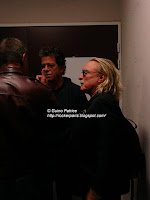 Lou Reed backstage with French singer Christophe
That's it for tonight,many things to come next week including many TV Shows ( with Kaiser Chiefs , the Killers , Franz Ferdinand , Beck , Santogold... ) Private gig ( Jacques Higelin ) and so on ... So stay Tuned
Publié par Angelo Misterioso à l'adresse 10:51:00 AM