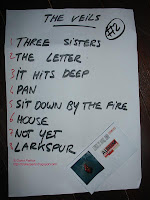 The Veils are playing this famous Canal+ tv show in front of a selected audience of 150 people.
I' ve never heard this English band before so it's a complete discovery for me even though I heard great reviews about them.
First song is really heavy , a kind of U2 on amphetamines ( if that's possible ) with a bit of mescaline , second song is more laid back but that's ok until the guitar player and singer switches to the electric piano. Then things are getting a bit ugly.
Who are they trying to fight with Keane ? Coldplay ?
Fortunately for them the female bass player is hot as hell and she knows it and is playing with it in her skinny white tee-shirt . Her little tits are moving to the rythm, Nice.
The red hair girl on the lead- backing vocals is also very cute all dressed in an old english victorian style.
When the singer is back on the guitar, things are getting MUCH more better.
Good band but Hey guys , leave this bloody piano to Coldplay !