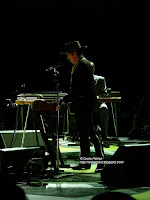 Back to the Palais des Congres for Bob Dylan's second show in Paris.
This time no fooling around , yesterday the audience, as soon as Bob was introduced , rushed to the front of the stage and it took the security a few songs to clear the perimeter.
Tonight everybody stayed quietly seated.
In fact Frenchies were really sleeping for the whole gig and only woke up for the encore, strange.
I've got to say that this show was much better than yesterday maybe because he played " Lay Lady lay" early in the show which is one of my favorite song. 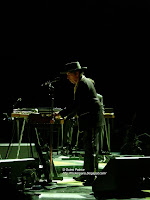 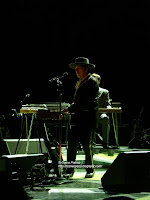 Of course, the lightning is still too dark to take decent pics ( That's Patrice Guino's opinion , our camera man ).
As long as you try to exclude the poor vocals , it's fine.
So I really enjoy this one.
French crooner Charles Aznavour was here, so was Lenny Kravitz( who seemed to be bored out of his mind ). 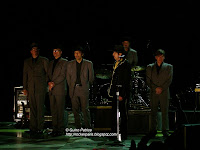 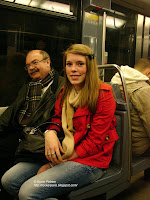 The whole cast / Beautiful girl in the subway
I met this beautiful young girl on my way home , i had to ask her for a pic she was so cute ( her father is next to her ) ;- )

" Thunder on the mountain" :