For METALLICA @ Taratata , please scroll down a bit ... 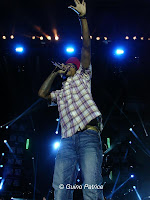 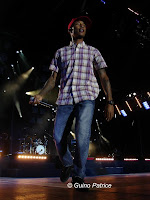 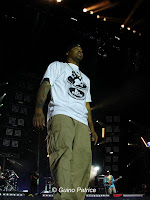 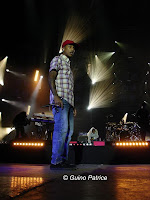 Baby-face in action ...
Hi there
Well... there was another Taratata recording tonight with Carla Bruni & Roger Hodgson ( former Supertramp ) but it wasn't worth going just to see 2 songs from Roger so i' ve been to see N*E*R*D @ La fete de l' Humanité.

It was a fucking nightmare to go there ( it's in Paris' suburb ), lots of traffic .
Luckily we arrived in front of the stage just as the band was being introduced .
Many people down there, around 50 000 .
I went straight to the VIP area, which is a little bit crap , on the right of stage but it was too late to sneak in down the front with the audience as it was packed, at least i had some space around me

Patrice Guino , our photographer , went into the pit ( enjoy his pictures !!! ) and with his contacts could managed to get ON stage , once again , for the rest of the show ( Bastard ! )
Needless to tell you that they've Rap-Rock the mother-fucking place. I really dig their music a very intelligent mix of rock & rap with bits of soul thrown in .
Their record " fly or die" is absolutly fantastic , i haven't heard the new one .

The 3 rappers ( or 4 ) walked that stage to death. Amazing how Pharrel Williams looks young, he really has a baby face. the show was very lively , for the last 2-3 songs they asked people to come on stage to rousing applauses. Then they get rid of all the boys and kept the girls for the last song which included a few seconds of the White Stripes' "7 nation army".
Some of the girls made it backstage , i don't know if they took'em back to their hotel as they were barely 17 .
Absolutely BRILLIANT . 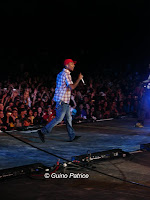 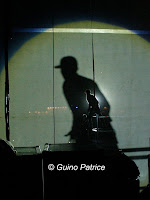 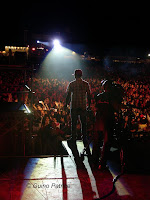 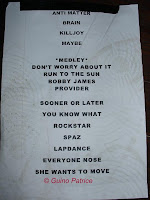 As if you were ON stage with'em ...
Can't wait to see THE BABYSHAMBLES tomorrow ( and Roger Hodgson as well ) @ "la fete de l' Huma... " . Babyshambles' drummer is playing a late night show with his own band @ Truskell in Paris after Babyshambles' set.