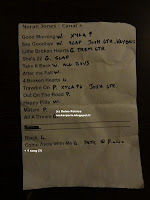 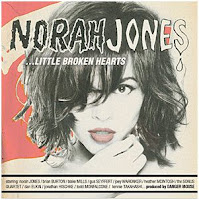 After seeing the Ting Tings @ Palais Royal for a 30 min set we went to an exclusive show by none other than Norah Jones.
She already played a 90 min set a few days ago @ France Inter that was broadcasted live to promote her brand new album "Little broken hearts".
This time it's in front of a selected audience of 200 people for canal+ tv show L'Album de la Semaine. Usually bands are only playing up to 7 songs , we're lucky she's playing a much longer set.
We don't have any of her records but we already saw her a couple of times: @ Espace Pierre Cardin for a private radio (RTL) show in Feb 2010 & @ France Inter for another private radio show in Dec 2009.
She's sexy, well dressed, has a beautiful and soft voice, even though she's not playing jazz anymore and has a "rock" band the music is still as soft as her jazz album.
Most of the time she's standing up and playing keyboards or on "electric" guitar, only to play one song on the piano.
She's trying to make it look as if she was in a rock band but Christopher Cross, who's well-known for playing American soft pop-rock ( we saw him @ Trianon last month) is playing Heavy Metal compare to Norah Jones.
Her songs are perfect lullabies to put your kids to sleep, there's only the single "Happy Pills" that is more up-tempo and "Black", produced by Danger Mouse & Daniele Luppi, that is sounding like a Serge Gainsbourg song from Melody Nelson, that are standing out.
The rest is soooo soft that it was like I took a whole tablet of downers before going to the show or maybe she did.
Coll 80 min set but too soft for us @ Rockerparis
Busy day:
The Ting Tings @ Palais Royal ( free show, it's outdoor & the weather's awful, not sure if we'll go , 6:00pm)
Lisa Hannigan @ Fnac Forum ( free show) 6:30pm & @ Fleche d'Or tonight
Nadéah @ studio SFR (Free show, Invit' only) 8:00pm