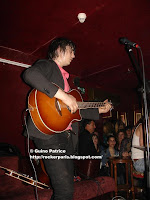 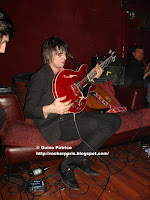 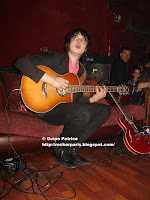 After attending French Punk-Rock Les Wampas's gig @ Cité de la Musique we're making our way to the Tigre club between Opéra and Palais Royal to attend Peter Doherty's "secret" show there. It wasn't so secret as it was everywhere on facebook on saturday morning.
We arrived there around midnight,Pete is having a smoke outside without being harrassed, as it's saturday night there are a few people outside : some of them having a smoke others trying to get in but it's not madness.
It's a 70 % female audience, all very pretty and in their early 20's.
We could get in very easily (we're Rockerparis for Fuck's sake;-) but some people were turned down ( no use beeing aggresive at the door).We had to pay 10 euros to get in, it was free for the regular customer.
This private club is pretty small (200 capacity) and all in red from carpet to paper wall. It's packed but not crammed.
Some (most of) of the girls inside are stupid arrogant bitches that should be kidnapped and sold as prostitutes to some eastern european countries.
Hard to believe the attitude of some of these bitches (Just ask Oliver Peel) when the owner of the place and the sexy "bouncer" girl are pretty cool and friendly.
Anyway we're here for the gig. 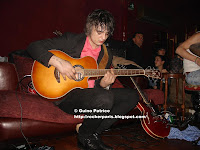 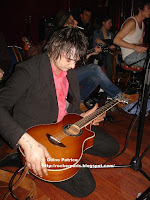 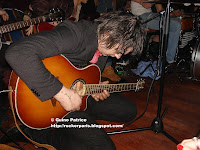 We have to endure a support band consisting of two guys on guitar, one dressed as if he was Brian Jones from the Stones, unfortunately without his skills or talent.Songs are lame and they should sing in tune.
It's just past half midnight when Peter Doherty's getting on the tiny stage with his acoustic guitar. We're at the front and for once nobody's pushing, people are here to see Peter but there are no real fans.
You can see that he's completely intoxicated, he's playing with a young French drummer (??!?).
The beginning of the gig is pretty good though shambolic with "Can't stop me now" and "Bonjour Tristesse" but then things are turning ugly.
Peter is completely out of it, can't remember how many times the microphone is falling down on the floor or how many times the guitar is unplugged and re-plugged.The drummer doesn't help ( even if he tried his best). Hard to follow Peter when he's changing rythm every 30 seconds.
Peter's not playing songs he's more jamming than anything else ("There she goes" was play), we have The Beatles' "She loves you" as well. 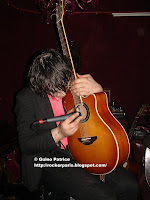 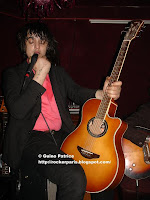 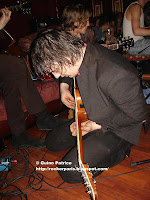 Being intoxicated is one thing but having some French Baby Rockers playing with him is another. A "singer" is doing one , the guy is fucking useless he seems more preoccupied by the way his hair is comb than anything else.Then we have a couple of other guys helping out on guitars.Maybe from the first support band
They are from the french rock scene, they have the look and the arrogant attitude but the problem it that they can't fucking play. Which is the complete opposite of English musicians: when they have the skills then they do act as proper rock stars.
Really don't know why Peter is hanging out with these guys. 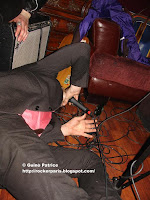 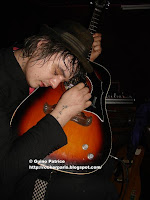 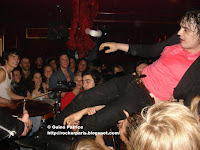 Drugs are kicking in

This gig is a complete mess, Peter's rapping for a song than making strange noises by scratching his microphone on his guitar strings for another and so on...
The only thing you can say after this gig is "Kids, stay away from drugs".
After 15-16 songs (?) The Stooges' "I wanna be your dog" is played and in the middle of it Peter stage-dives in the audience a couple of times to get back to his dressing room.
60 min show and probably the worst show I have even seen Peter doing and believe me we've seen him many times solo or with The Babyshambles @ Rockerparis. 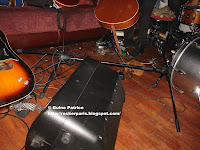 We made a quick exit to go home, we met Oliver Peel that was late once again (check his review, pics are coming shortly)
Much more Pictures from the gig HERE.
If you wanne see how shitty it was there are two videos from the end of the gig HERE (???) & HERE ( I wanna be your dog & Stage Divin')
Check our reviews of ( all but two) Peter Doherty's solo shows for 2010 in Paris:
Pics & reviews : 1) Fleche d'Or 2) Joseph Store 3) Truskel1 4) Truskel2 4) Truskel3 5) Maroquinerie
Publié par Angelo Misterioso à l'adresse 2:54:00 AM