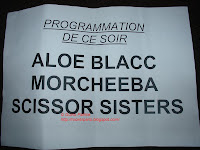 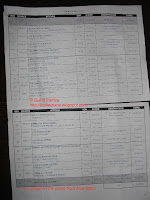 Second day of recording for the Canal+ tv show La Musicale, yesterday it was with Eminem and two other bands ( can't remember their name).
Yesterday we at ROCKERPARIS were at the premiere of The Doors documentary " When you're strange" with their drummer John Densmore.

Tonight we could attend this TV recording, nice set up a bit like Jools Holland's tv show with the audience in the middle and three stages around it.
As you can see on the program ( detailed setlist above) each band performed two songs in the row unfortunately Scissor Sisters were the main attraction tonight as they performed 6 songs in all, Morcheeba only two ( we came for them) and Aloe Blacc 4 songs in all.

Scissor Sisters : I already saw them live in London at the Live8 a few years ago , they're very entertaining on a stage but the music ( apart from their latest single which they play first tonight) is complete crap, too much disco for me. Both singers came down in the audience to dance on the last song they've performed. Crap music but nevertheless entertaining Live.

Morcheeba: Great to see them back with the original singer Skye, very cool and relax music , too bad they only had two songs.

Aleo Blacc: Soulman ( unknown to us) is doing very good with vintage soul, even his clothes seemed vintage ( red pants) even the way he was dancing remembered me of the Sam & Dave routine. cool set ( 2 songs). He came back at the end of the show to play two extra songs (??) alone on the piano.

Very cool evening even though MC Emma De Caunes was annoying acting stupidly during the interviews. Her English is also very far from being perfect.
Maybe someone should tell her that Cats have 9 lives NOT 7, as she kept on asking musicians which of their 7 lives they were living.

Tomorrow morning I'm going to the screening of The Rolling Stones' documentary "Stones in Exile" Thanks to our mate from website DOCTORSTONES.
We ( I ) should go to the Cité de la Musique tomorrow night to see Air & Jarvis Cocker if I'm not too sick as i catch a cold a couple of days ago and my mates from ROCKERPARIS left me alone in Paris this week.
Publié par Angelo Misterioso à l'adresse 11:40:00 PM