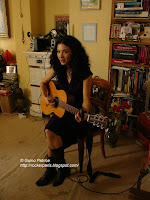 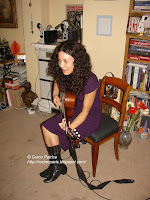 Very early session for this sunday as Mia Doi Todd, who already did an Oliver Peel session in April (click for review), is back in Paris but has to catch her train on time.
Lovely tiny voice over an acoustic guitar for this folk artist with south American influences.
She has a great record out & the video for the single was done by French director Michel Gondry.
Very different audience today with lots of new faces (Where are the regulars ?) including French-American actor Jean-Marc Barr & folk artist Erica Buettner, who will be playing this very same place next saturday. 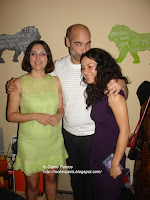 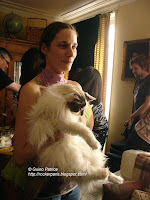 JM Barr & friends, the cat is in good hands

Headlining is Jeanne Madic aka Vanishing Twins, she already played supporting probably the most talented folk artist ever to grace Oliver's : Simone White.
Jeanne is also a regular and we saw her playing the Scopitone club in Paris.
She's playing a very conceptual music on diatonic & chromatic accordion with projections on a "screen" then we had a proper song as an Encore, a personal version of " My Girl" also covered by Nirvana. 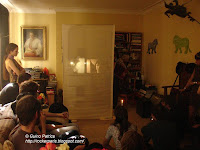 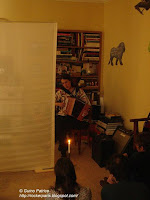