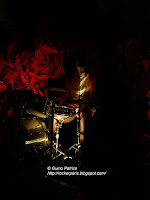 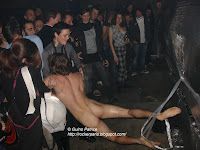 Thank god it's Friday, but it's friday or saturday every night @ Rockerparis.
Anyway there was no gig planned tonight for us , so Mathilde took me to a squatt (an underground parking lot ) in the 13th district @ La Suite ( no relation with the posh club Av. George V ).
We also had the choice to go to see a screening on Johnny Thunders we prefered LIVE music to a dead Body.

First on was a shitty band , dressed funny but the music was crap.
Then we had Tchiki Boom, cool rock-surf band with some dancers ( see pic ) 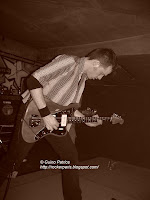 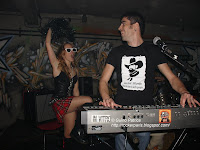 Then it was time for a naked performer to escape his prison of plastic. ( Pic above )
As we were about to leave the premises, we saw a couple playing & singing a music I hate , 80's new wave but the lyrics to their songs were so funny ( talking about sex ) that we stayed for their performance as they didn't only play but acted too. ( see below )
Don't know why so many performers need to show their dicks and assholes to the audience at least they could be girls. 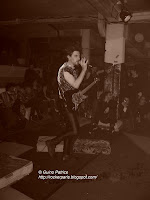 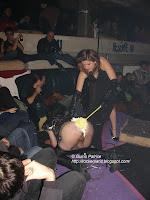