UPDATED NOV 12th:
Perry has told Billboard that Tyler wanted a two-year break from the band – but he wants to keep going.
"Aerosmith wants to work," Perry said. "We're gonna work and we're gonna do something – I'm not exactly sure what yet, but the band's too good to let it sit around. We're not going to wait for Steven."
The guitarist added that Tyler's appearance at his solo gig was a complete surprise. "He was really the last person I expected," he revealed.
UPDATED NOV 11th 2009
STEVEN TYLER NOT QUITTING AEROSMITH
He performed yesterday with the Joe Perry Project and announced that he wasn't leaving Aero
VIDEO HERE: 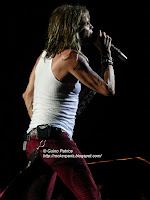 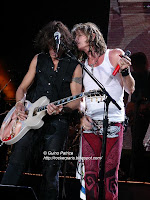 EXCLUSIVE:
STEVEN TYLER HAS LEFT AEROSMITH
A few days days ago Aerosmith were considering replacing Steven Tyler with a new vocalist, according to guitarist Brad Whitford. In a new interview with Classic Rock magazine, Whitford has revealed that the band are to hold meetings – probably without Tyler – in the next fortnight to discuss their future. One direction being considered is to replace Tyler with a new singer, Whitford confirmed. He added that for Aerosmith 's recent gigs, Tyler had been given a separate dressing room to the rest of the band. ( Source NME )

More from the Aerosmith camp:

Steven Tyler has quit Aerosmith, according to the band's guitarist Joe Perry.
Guitarist Perry has revealed his pal has left the rock group after its performance as part of the Formula One racing season's final weekend in Abu Dhabi last weekend.

He tells the Las Vegas Sun, "Steven quit as far as I can tell. I don't know any more than you do about it. I got off the plane two nights ago. I saw online that Steven said that he was going to leave the band. I don't know for how long, indefinitely or whatever. Other than that, I don't know."
But Perry is determined to continue with Aerosmith, even if Tyler refuses to return.

Reed the story on the Las Vegas Sun newspaper.