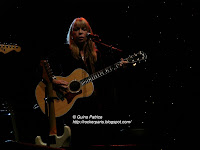 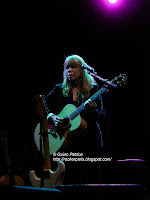 Just a few days after recording a tv show for Arte : " One Shot Not" playing two new songs.
Rickie Lee Jones is back in Paris this time to play a proper concert in a theatre I've never been before: Bobino in Rue de la Gaité, Montparnasse.
This street Rue de la Gaité ( "Joy street" ) is in the heart of Paris in the neighbourhood where all these famous painters ( Modigliani, Picasso, Soutine... ) used to paint. It's also a special street as it's the only street where there are sex-shop and theatres in this area. 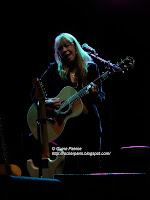 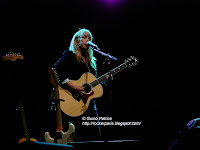 Bobino used to ba a famous theatre where many French artists played : Brassens , Gréco, Fernandel , Renaud, Coluche... and then was destroyed in the 80's and rebuilt but it never was what it used to be... until now with Rickie Lee Jones. 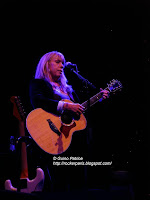 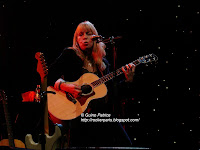 No support band or real band with Rickie, just her with a bass player and a guitar player.
She wasn't happy at the beginning with the sound and complained for the first 4-5 songs then things get smooth.She remembered me of Lou " grumpy old man" Reed .
The voice is intact , crystal clear; She's playing most of the set on acoustic guitar, a few songs on the piano and some others on electric guitar ( a white Fender ).
Well , you really have to be into it to appreciate , if you don't know her repertoire it can be quite boring to a novice.
I don't know everything she did ( and the new record ) some parts were cool but others ...
There are too many soft songs, too bad the show started in a very nice way with David Bowie 's "Rebel rebel".
She's not like those new English bands playing barely for an hour even with 3 records under their belt as she almost played 3 hours with 'jus't one song as an encore.
Nice but it could have been better and ... She DID NOT play " Chuck E's in Love". NOOoooooo!!!! 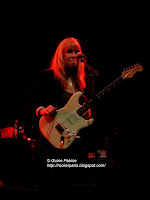 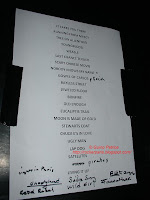 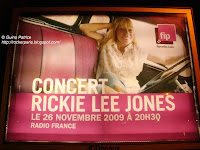 Next show in Paris on the 26th @ Radio France
( free show first come first serve basis )
Here's a video , sorry for the sound:

Thanks to Yaz
Publié par Angelo Misterioso à l'adresse 12:12:00 AM