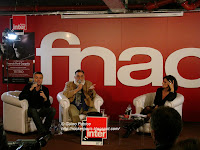 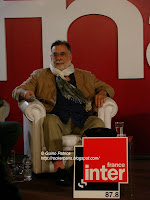 AWESOME !!!
Francis Ford Coppola is in Paris to promote his new movie TETRO.
A couple of days ago he did a master Class @ Forum des Images, yesterday he presented Tetro @ Max Linder movie theatre ( He was there 5 min ) & tonight he's doing a Master Class @ Fnac Store.
We could secure a few tickets , have nice seats down the front.
8:20 Pm the Master is entering the Fnac store for a Question & Answer.
First he took questions from a girl from France Inter radio then from people in the audience. 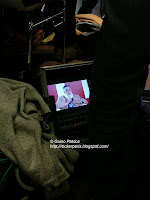 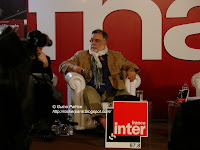 He talked about everything : his new movie & and how to cut production costs ( he did it in Argentina because it's cheaper , he's the producer ) , Apocalypse Now ( a great war movie to make lots of money to do art films with the money afterwards ) , How he started ( HERE on video ) and many other things I don't remember right now.
SOOOOOooo interesting , the guy is so cool and relax.
We spent more than an hour with him and it was really fantastic.
The whole video will be online on the Fnac store website shortly, I advice you to have a look there for the whole thing ( I'm Waayy to lazy to type it down now ).
At the end he came to shake a few hands to people ( including me , Yo ).
This will be hard to forget.

Francis Ford Coppola on the beginning of his career :