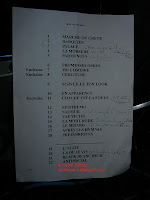 French Rock band Trust is playing at the Zénith to promote their recent cd " 13 à table ".
It's a small zénith ( 3000 capacity) and it's far from being sold out , the pit is very small and very close to the stalls which is perfect as we have 2nd row seats so the view is perfect .
Opener "Marche ou creve" ( see video ) is quite good , it's gonna be a hot one tonight ! They followed with a couple of classics unfortunately the new mid -tempo songs are lame and they've played lots of it .
They also have a DJ on stage who is completely useless and outdated it's OK on a couple of songs but on most of it it's boring.
I felt like sleeping for a good part of the gig, the singer Bernie tried to make the audience ( mostly male in their 40s ) sing a couple of times with no great effects . His voice is powerfull but he only sing half of the lyrics when the song is getting a bit fast, shame ...
Even the classics couldn't wake me up at the end of the show including their N° 1 hit " Antisocial" .
I grew up with this band , they were so popular in France in the early 80's but now ...
One of the most boring show I have been to this year .

Video of the first song :