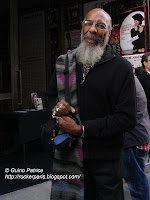 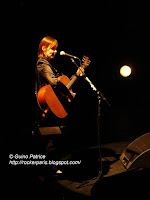 Suzanne Vega is back in Paris , this time @ the tiny Alhambra.
Needless to say that the show is SOLD-OUT.
As we arrived around 5 PM we spotted Richie Havens going out of the venue ( he's playing here tomorrow ).
This club is brand new , first time i'm going there. around 600 capacity with a small balcony.
Suzanne played in Paris last year ( June 27th 2007 ) to promote her then new cd " Beauty & Beast", i've been listening to her whole catalogue these last few days and this album is really her best so far ...
i don't know if it is because it's sunday , show starts at 6:30 Pm
Still very good looking with her hat ( and without ... ) , this is one of the last show on the tour, no full band tonight just Gerry Leonard on guitars , loops , some kind'O Bass and weird noises.
I love her music and when you have the right songs you don't need 20 musicians to enhance them.
I remember a show at la Cigale a few years ago she came with only a bass player and when i saw that i thought "What the Fuck ?!? It's gonna be boring" No way it was one of the best gig i've been to that year .
With a guitar or just on vocals (with the help of Gerry) that's enough don't need no more as she has some very good songs , she picks up some of her best plus a few from the last cd ( did i tell you that it is very good ? )
See Setlist for details... NB : Song n° 12 was " Maggie May" & She added "world before Columbus" before "Anniversary" ( here on video ) & last song was " Cracking".
Very good songs, a few jokes, a smile and you've got yourself a GREAT gig !!! Isn't that simple ?
After the show, as she always does , she came to sign a few cds in the lobby. 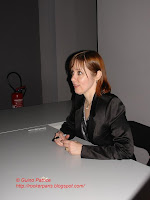 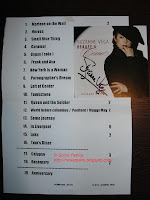 Yesterday Sony Music France organized a "hunt" in Paris to promote the new AC/DC record " Black Ice" . Hostesses were giving you clues in different part of the capital , to find cds with in one of them a ticket to go and see AC/DC in the US for the first show of the world tour .
Didn't get ANYTHING . 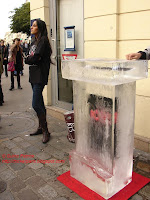 A beautiful hostess in front of 1 of the 6 "Black Ice", here in Montmartre.
Publié par Angelo Misterioso à l'adresse 9:47:00 PM