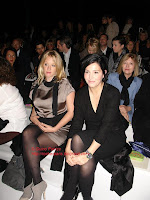 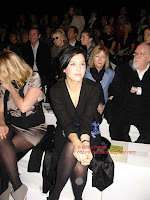 Before show with Ludivine (left ) and Sharleen
+ Peter Blake ( far right with the glasses)
Hi There
Just back from Stella McCartney 's Spring/Summer collection .
A couple of celebrities including french actresses Zoé felix , a heavily pregnant Ludivine Sagnier ( more beautiful than ever ) , 60's supermodel Twiggy , Meg Matthews (former wife of a Gallagher Bros from Oasis ),Zoé Kravitz ( daughter of Lenny and Lisa Bonet ) L'wren Scott ( Mick Jagger ' s girlfriend ) Sharleen Spiteri from Texas , former top model Stéphanie Seymour ,Sir Peter Blake ( he designed the cover of The Beatles' Sgt Pepper ) and of course .... Sir Paul McCartney with his son James
+ Paul girlfriend's Nancy Shevell who's keeping a low profile, funny she's not on the guestlist and not on the seating plan , so she probably watch the show from backstage.
We get there around 9:30 had a nice breakfast ( it's early in the morning ) with guests including Zoé and Ludivine . Then the show started , late as usual . Paul arrived with his two bodyguards ( plus french security ) just before the lights went out .
Fashion show was good , then we went backstage for a cup of champagne and canapés .
We met Sharleen ( as cool as usual and sexy ... ) , sir Peter Blake and Paul who stayed for more than an hour , he was nice to everyone and very chatty , playing with stella's kids ( he played a bit of harmonica for them )and so on ...
Patrice took a few pictures here they are : 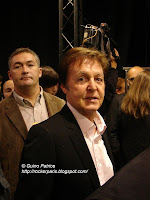 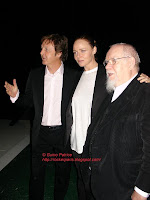 After show : Paul with Stella and Peter Blake 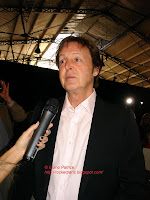 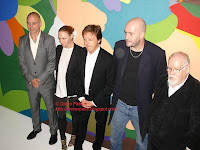 Paul and a couple of blokes + Stella & Peter 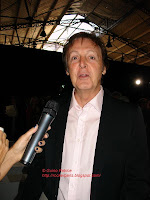 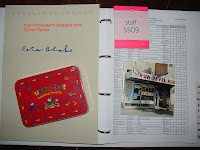 What more can we ask ? Nice start for today , tomorrow it's CHANEL ( if we get up ) .
Thanks again to Patrice Guino for all the pictures, and thanks for putting us on the guest list for this show ... YOU ARE THE MAN !!!

Here's a link to a very good french beatles' site with our pictures in the News section :
http://www.yellow-sub.net/breve.php3?id_breve=12227
Video of the end of the show with "Maybe i'm amazed" in the PA : 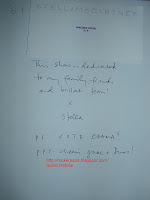 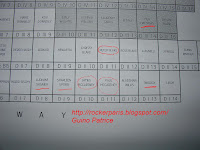