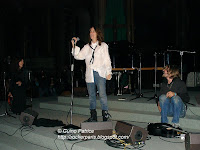 Patti Smith and her two children ( Jesse & Jackson )played live all night long @ the church of St Germain des Pres over 5 sets ( yes 5 sets ) lasting between 40 and 50 min starting at 9:30 PM ( Oct 4th ) last one 4 AM ( Oct 5th ) . Guest was actor Micheal Pitt playing guitar.
She was supposed to read some poetry from St François d' assise but in fact it wasn't that at all.
It was a proper concert from Patti smith.
So don't believe all the shit you read in the press, even this morning, saying she improvised all night , not true at all she did it on a couple of songs no more .
David Lynch was there for the first show .

We had the free tickets for the first 2 shows ( 9:30 PM and 11PM ) which we had collected a day earlier then it was first come first serve for the 3 other shows .
Going there we just thought of going to the first one ( and maybe the second ) as she was supposed to read poetry , seeing what we saw for the first gig we came back for the second and after meeting a few friends there thinking the same as us , we stayed for the whole fuckin' night .
YEAH BABE a whole night with Patti Smith
And we've been to all FIVE shows !!! 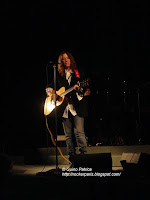 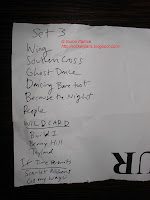 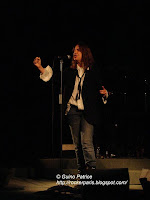 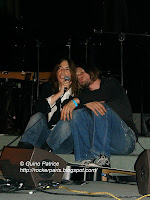 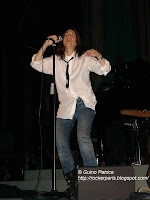 Can you believe the shit ? 5 SHOWS IN ONE NIGHT in one of the most wellknown church in the world in the heart of the Latin quarter on the left bank of Paris.
FUCKING BRILLIANT !!!

Free daily newspaper -20 Minutes- has used one of Patrice's pictures from that night to illustrate Patti Smith's gigs at the Eglise de St Germain des Pres on their website :
http://nuit-blanche.20minutes-blogs.fr/archive/2008/10/04/vos-photos-de-la-nuit-blanche.html