We just arrived at the Bataclan for the encore, as usual it's hot as hell and people are smoking
We saw a good 15 min of it and the only thing that came to my mind afetr a couple of minutes is FUCK !!!
I Should have come here instead.

Live: the Kills are killing the Killers.

There are only two and they rock much more than the 4 guys ( + their 2 sessionmen ) of the Killers.
Anyway the night ended on a very good note as there was an aftershow party at the bar so we met both of 'em , these guys are just great and nice to anyone there. 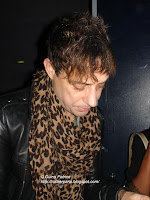 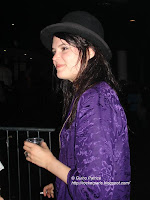 I love The Kills !
NB : Jamie "Hotel" Hince told me that they were doing two TV shows tomorrow including one for Arte so i guess that they're doing " One shot not" , that's very nice as i've already planned to go there. Santogold ' Franz Ferdinand & Alena Diane are also on the bill.
Publié par Angelo Misterioso à l'adresse 12:24:00 AM