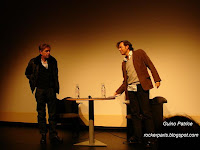 Jean-Claude Vannier is the composer and the arranger behind masterpiece " Melody Nelson" for which Serge Gainsbourg wrote the story and the lyrics .

As part of a Serge Gainsbourg week-end the Cité de la Musique is playing movies and documentaries and is inviting Jean -Claude Vannier for a conference.
A journalist is asking him a few things about his work as a composer and arranger for different french artists and for soundtracks.

He's introduced as an introvert but he's funny and chatty, it's a very good way to know him better and his work but " Melody Nelson" is not really mention here ( it's only two months of his life and he worked with Serge for only a couple of years ) .

We met him afterwards even though a bitch from the Cité de la musique tried to kick us out.
The guy is really nice and the funny thing is that he watched my video feat. Brian Molko on YouTube from the concert.
The show took a long time to prepare and a LOT of money but no one made any cash on it and the artists did it for free.
The weirdest thing he told me was that Big Jim Sullivan who played hundreds of sessions in the 60's ( he was as well known as Jimmy Page on the circuit ) and who's playing on " Melody Nelson" played soli for the Rolling Stones ( it's highly possible as they've always used sessionmen on their records throughout their career ) and THE BEATLES at the beginning .
Big Jim Sullivan playing guitars on Beatles records without anyone noticing it for 40 years, I just CAN'T BELIEVE IT !!!
So Jean-Claude if you're reading this , tell me where you get that from ?