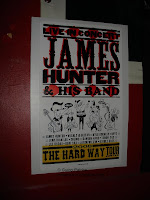 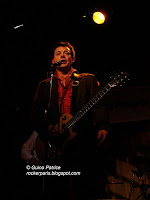 One of the last concert for this Jazz festival in Paris , haven't been to a lot of these as there were many other gigs this month.
But what a nice way to ( almost ) end this Fest with James Hunter.
It's not really Jazz even if you can hear this musical influence into his Soul/ R&B , even a bit of the very early rock in a time when it wasn't called Rock and was played mainly ( shoul i say ONLY ) by blacks .
If you close your eyes, this lad ( yes mate he's one of us ) sounds like a black man from the 50's-60's even tough he's as white as ... M Jackson well , a bit more !
Hard to believe that his music was made in the 21st century,
I don' t want to repeat myself so have a look at the review i wrote when he played Canal+ TV Show " L' album de la semaine" in September.
http://rockerparis.blogspot.com/2008/09/james-hunter-l-album-de-la-semaine.html

He is just FUCKIN' GREAT !!!
His new record " Hard way" is getting rave reviews everywhere and he fucking deserves it.

Just listen to a few songs for free on his website : http://www.jameshuntermusic.com/
And this chap is funny too ...

NOW , Watch our video below you won't be disappointed. 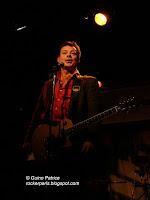 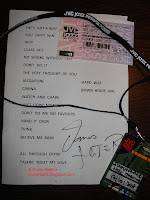 -Pictures AND review by Patrice Guino-
Here's the title track of his new cd " Hard Way" :

see ya folks tomorrow afternoon for AC/DC 's "Black Ice" hunt down the streets of Paris.
and don't forget Suzanne Vega on sunday at the Alhambra in Paris.
Publié par Angelo Misterioso à l'adresse 1:12:00 AM