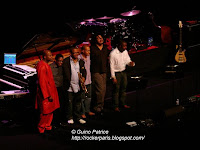 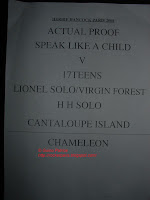 The first time he ever played in Paris was in this very same place with Miles Davis when he was young so he's glad to come back here even tough he doesn't recognize it . Nobody would it's been completely redesigned .
He wants to celebrate peace with this concert as the wife of decapitated american journalist David Pearl is in the audience .
Tonight he's playing with a different band ( guitar , drums , bass , trumpet and harmonica ) from June so the show is different and more jazz.
After one hour he has only played 4 songs including a cover of Wayne Shorter ( "V" for Visitors ).
Not really my cup of tea for most of the show, it's hard to say that about Herbie but a couple of songs were quite annoying. He did one written by his guitar player called "17teens" because it has 17 beats . So it was a real challenge to play it ( so he says ).
He introduces his musicians many times and speaks easily between songs . Each one of them had soli including the guitar player that was complete crap.
Anyway... great Finale with Chameleon. for a performance of 180 min .
Could have been better ...
Publié par Angelo Misterioso à l'adresse 11:43:00 PM