Hi there
Free concert tonight @ Fleche d' Or in Paris.
With all the buzz around the Last Shadow Puppets, i could guarantee a packed house and so it was.
Many people here including lots of record companies employees . Everyone wants to see Miles Kane band .
Two openings bands before the main attraction , they were Ok .
The Rascals are a bit different from the LSP but the 60's remain in their music and they are more rock which suits me fine.
Even tough the band is quit young they're very tight , Miles is very cool on stage talking to people , drinking some red wine ( so english ! ) and basically just having fun .
The gig was short but intense
i can see a bright future for The Rascals , hope the cd will match their gigs . 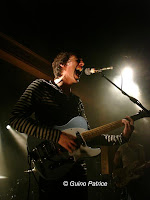 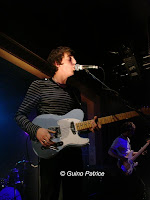 Some of the songs played : Rascalize, Out of dreams , Bond girl , wicked ways (new song ), Fear invicted to the ... , freakbeat phantom ...
Including one new song they have never played before, well that's what he said ...
Publié par Angelo Misterioso à l'adresse 1:02:00 AM