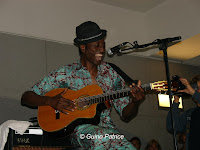 Keziah Jones
Keziah Jones is back in the tube ( where he was discovered a few years ago ) for a second private show this week .
He already played on Sept 1st at the station Miromesnil for a mere 20 min. Very good marketing to promote his new cd as it was all over the news in France .
He will play two other gigs in the tube this week in other secret tube stations that will be revealed on the day to only a happy few.
For this second gig we have a very nice blues band opening RENE MILLER . They started around 3:00 pm as the station was getting more and more crowdy; They've played for a good forty min. 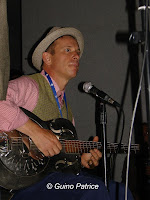 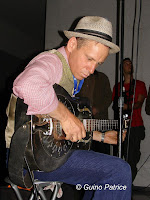 Rene Miller
Acoustic blues with a steel guitar and a very good harmonica player ( David Chalumeau ).
Videos here :
http://fr.youtube.com/user/rockingparis
Check them here :
http://profile.myspace.com/index.cfm?fuseaction=user.viewprofile&friendID=133097989
Very nice introduction To Keziah Jones .
Now it's packed . For each of his 4 concerts he will play a different style of music , for this one it's his trademark bluefunk . 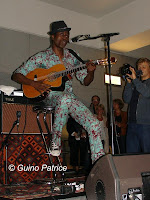 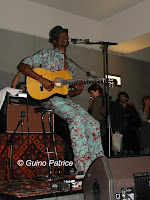 A solo acoustic set of his new songs with a couple of oldies thrown in including his smash hit song and last one for this afternoon "Rythm is love" .
With his shiny smile , his incredible way of playing the guitar and his songs, of course, he just played to an already conquered audience .
Very good 30 min plus afternoon show . 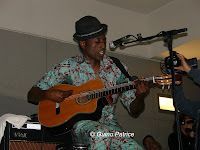 Here is one song :

Tomorrow , There will be a private listening party ( only open to journalists ) to have a taste of
THE NEW AC/DC : " Black ice ".

Hope i'll be able to get there as it's gonna be busy tomorrow , The Fuckin' STOOGES are playing a private show in a club and The Stray Cats are playing the Zénith.
Hard to choose i'll try both ;-)))

Next KEZIAH JONES SECRET GIGS ON SEPT 4th and SEPT 6th ( all 3 PM ) in the tube.

Metallica will be in Paris on Sept 10th to play 3 songs at french tv show "Taratata" ( a french Jools Holland ). They should do another tv show " Le grand Journal " for Canal+ for a interview .
Speaking of Metallica the album has been sold by mistake in Paris' record shop Gibert Jeune in Saint Michel on Sept 2nd ( instead of Sept 12th ) . You should know about it if you're a Metallica fan , it's been all over the news . Only 50 copies have been sold.