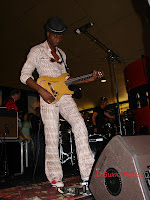 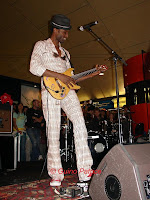 Last show for Keziah Jones @ station Auber.
Complete success for this parisian tour of the tube stations .
4 shows ( Metro Miromesnil , Olympiades , Montparnasse and Auber ) each time many journalists , cameramen and photographers for maximum publicity .
The record company did a good job ( for once ) it was all over the news and open to general public which doesn't happen very often when an artist is doing a showcase to promote a new record . Well... it was a limited access , " for security reasons"; 15000 people registered and less than a 100 people were contacted to be revealed the secret location of each gig. But ,Hey everybody has a cellphone now .
Nice week for me as i've been to 3 out of 4 shows ( didn't go at the first one but he only played for 20 min ), plus a radio recording yesterday ( he played 4 songs plus interview )

This afternoon it's party @ Auber , Keziah is playing with his band ( one bass plus Drums ) and its the biggest of all 4 shows ( around 400 people ) and it's a ( almost ) center stage with people all around.
Instead of the acoustic gig it's a more Hendrix-like gig , the guitar is screaming with a couple of technical problems but anyway that's Rock'n Roll , it can't be perfect .
Very lively atmosphere with fans , small kids and family and people who just happened to be at the right place at the right moment.
He played 9 songs , 40 min .
the best of all 4 shows .