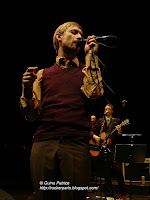 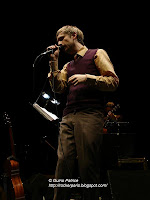 As i'm a lazy sod, just read the review from the first show and replace the sentence "Some of the french songs were clearly not rehearsed perfectly " with " This time the french songs were almost perfect " . LoL
He still messed up the lyrics to the Georges Brassens' song " les copains d' abord" but i think he did it on purpose for a laugh.
Yesterday's show was very good but tonight it's a "sans faute" .
Complete setlist below with " something for the weekend " added as a last encore otherwise same setlist with same guests : Vincent Delerm for 2 songs and Daphné for 2 songs including a somptuous " Initials BB feat sexy Boy "

AWRIGHT Neil with a show like this ( with the french songs ), you can tour the world.

Vincent Delerm came back for a few seconds during "Joe le taxi" playing the little girl ( Vanessa was 14 when she recorded the song ).

Patrice Guino did an effort to get even better pictures than yesterday, nice. 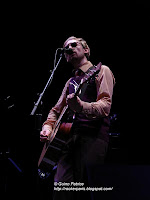 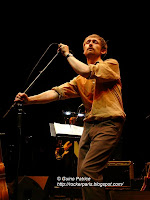 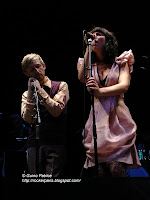 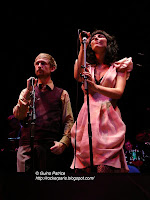 We met Neil after the show , he was very nice and chatty.

I asked him how he picked the songs here's a few things :

"les copains d'abord " ( Georges Brassens ) suggested by his french teacher because everyone knew it in france.
" je changerai d'avis" ( francoise Hardy ) He heard it at Café rouge @ Heathrow Airport and then used it as a walk on song for his concert .
" Joe le taxi" ( Vanessa Paradis ) it's a joke.
" L' amour est bleu" : he did a program for BBC2 and had to watch all eurovision song contests ( lucky you ;-)) and he liked the song.
"Amsterdam" ( Jacques Brel ) He had to do a song by this artist.
He wanted to do a cover of Edith Piaf but he realised it was to hard to sing so he gave up . 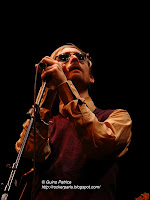 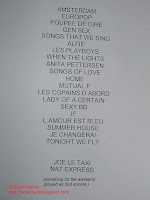